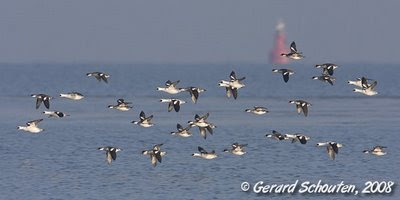 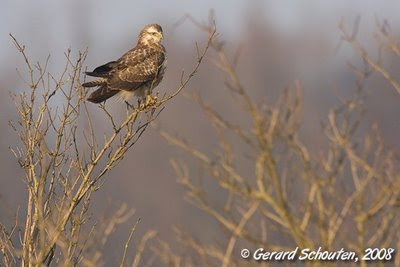 An excursion to the “Oostvaardersplassen” was on my wish list for the winter holiday. A little bit of natural history first: The polder it exists in only became dry in 1968. Before 1968 it was part of the IJsselmeer (sometimes translated as Lake IJssel). The Ĳsselmeer on its turn was created in 1932 when an inland sea, the Zuiderzee, was closed by a 32 km dam, the “Afsluitdijk”. The original destination of this new land reclaimed from the sea was a large industrial area. However, because of the economic recension of that time plans were postponed, and nature took its chance. Within a few years a wetland of international importance came about.
This day the “Oostvaardersplassen” offered classical Dutch winter scenery, all inland coastal lakes were frozen, and everywhere people were skating along the reed beds. As far as nature is concerned I want to share 2 photos.
Smews (Mergus albellus/Nonnetje), fishing in a dense flock on the IJsselmeer took wings after disturbance of a low-flying helicopter. Such large groups are rare today. A Buzzard (Buteo buteo/Buizerd) looking for prey, using the top an elder as a post. Note the intense green color of these bushes.

Posted by Gerard Schouten at 15:47 No comments:

Tiny beauties of the wood 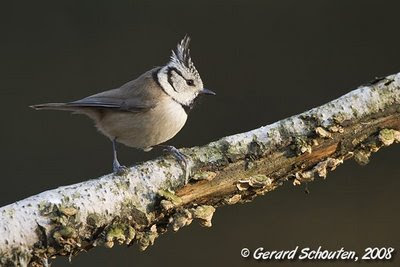 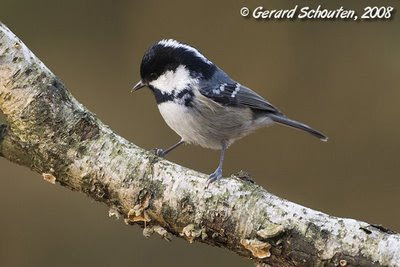 Today I joined Marijn Heuts, an excellent nature photographer known for his artistic view, to a feeding station in one of the conifer woods near Eindhoven. It was cold, around –5°C, but sunny. These little tits (no joke, that’s how they are really called!) were eager for food. These woodland-dwellers are not shy, nevertheless it was hard work because they are restless and moving very fast. Therefore, I was very happy that after a half-day photo session I ended up with a few sharp shots of both Crested Tit (Parus cristatus/Kuifmees) and Coal Tit (Parus ater/Zwarte Mees).
Posted by Gerard Schouten at 15:46 No comments: 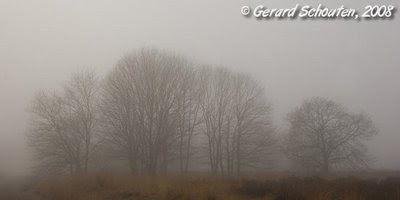 The dark days before X’mas, the sun was not strong enough to resolve the fog. Ideal circumstances to immortalize tree silhouettes.
Posted by Gerard Schouten at 20:19 No comments:

Drakes on the water 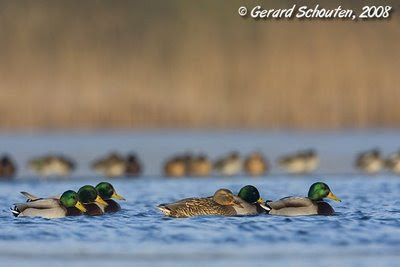 I like ducks so much in winter, the males have beautiful colors. Mallard (Anas platyrhynchos/Wilde Eend) drakes (♂♂) are probably the archetype of dabbling ducks, because they are widespread around the globe and most recognizable. This picture clearly demonstrates the greenish specular reflection of their heads.
Posted by Gerard Schouten at 13:32 No comments: 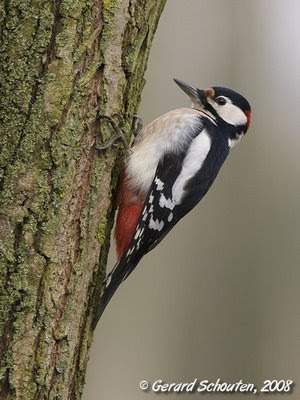 My Santa Claus present: A ♂ (see the red nape!) Great Spotted Woodpecker (Dendrocopos major/Grote Bonte Specht) in a typical grey-brown gloomy winter setting. This photo was taken in my home village Nuenen, at exactly the same spot where Vincent van Gogh painted (125 year ago), in his dark period, his poor “Weaver” series, and within a stone’s throw from the location where he created his famous “Potato Eaters” work.
Posted by Gerard Schouten at 18:50 1 comment: