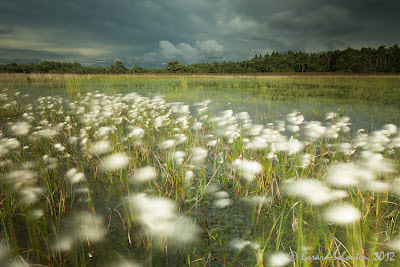 It is now more than a month ago since I started photographing ‘my’ fen with Common Cottongrass (Eriophorum angustifolium/Veenpluis). I have made many pictures. Now the flowers are on their return and the seeds are taken by the wind. I wanted to capture this final process, and I had such a photo in my mind for quite some time. Yesterday late afternoon the circumstances were perfect.
I had to do everything I could to obtain reasonable long exposure times out in the open field with sunshine. First of all I lowered the ISO value as much as I could on the camera (50). By the way it is a pity that the camera manufactures are only interested to extend the ISO range at the high value end; there is also a need in creative photography to go to ISO 25, ISO 10, or may be even lower. How nice would that be! Next I used a very small aperture (f18). Usually I do not want to go much beyond f16 because in my view the image quality gets less if you use so little glass. But the big trick to obtain a shutter time of 13 seconds is the fader (@ 7 stops) in combination with a 3 stops gradient ND filter (3 stops). With this photo I close my Cottongrass project for this year.
Targets for next year: Cottongrass with a rainbow in the sky or with some thunder and lightning ... ahum, keep on dreaming Gerard, but on the other hand ... dreams are always the starting point for new things, isn't it? But first of all it is time to take a small break and work out a few ideas for new project.

Posted by Gerard Schouten at 10:13 No comments: 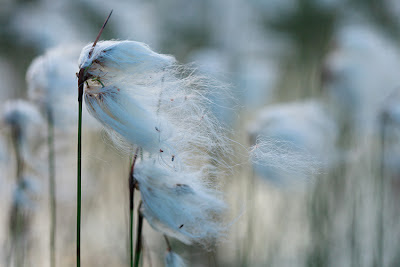 For those who are interested I copied a few informative lines from Wikipedia about the subject I was working on the last couple of weeks. Common Cottongrass (Eriophorum angustifolium/Veenpluis) is a plant from the sedge family, so even though it looks like a form of grass, technically it is not. It grows in acidic wetlands and peat bogs all over northern parts of Europe, Asia and North America. The flowering stem is 20–70 cm tall, and has three to five cotton-like inflorescences hanging from the top.
Did you know that the presence of Cottongrass is a useful indicator to hikers of potentially dangerous deep peat bogs to be avoided! Oops …

Posted by Gerard Schouten at 09:52 No comments: 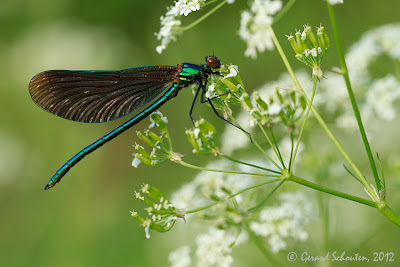 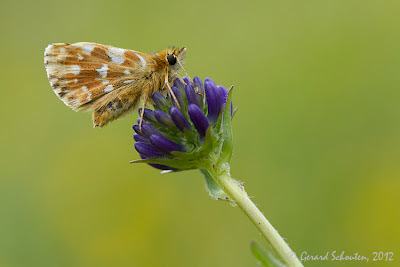 Together with Silvia Reiche, famous for her fine and detailed insect live photography, I visited the Eifel. This sparsely populated hilly area in Germany is normally a paradise for butterflies at this time of the year. However, today the numbers of butterflies were very very low (despite good weather, i.e. sunny spells and not too much wind after a cold morning). Nevertheless, we found several special species. The hilltop calcareous grassland list: Dingy Skipper (Erynnis tages / Bruin Dikkopje), Red-underwing Skipper (Spialia sertorius / Kalkgraslanddikkopje), Purple-edged Copper (Lycaena hippothoe / Rode Vuurvlinder), Small Blue (Cupido minimus / Dwergblauwtje), and Woodland Ringlet (Erebia medusa / Voorjaarerebia). In the late afternoon we drove to a valley with to search for Bog Fritillary (Boloria eunomia / Ringoogparelmoervlinder). And luckily we found one, but again it was the only flying butterfly in a marshy meadow full of Common Bistort (Persicaria bistorta / Adderwortel)! I suspect that the many caterpillars did not survive the drought of spring 2011.
But the good news of today is that for the first time since I was 4 years old I was able to walk an entire day in a field full of grasses heavy with spikelets without sneezing, watery red eyes and a runny nose. I still can’t believe it, is my hayfever finally on the return?
On the photos you see Red-underwing Skipper on Black Rampion (Phyteuma nigrum / Zwartblauwe Rapunzel) and the star of the day, a ♂ Beautiful Demoiselle (Calopteryx virgo / Bosbeekjuffer). The latter name sounds like contradictio in terminis but it is not in this context. 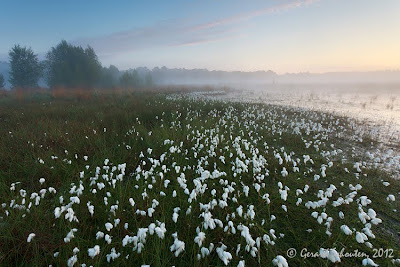 As you can see the Common Cottongrass (Eriophorum angustifolium/Veenpluis) is still flowering luxuriant! This morning it was quality time again; the exploration of last Wednesday paid off now!