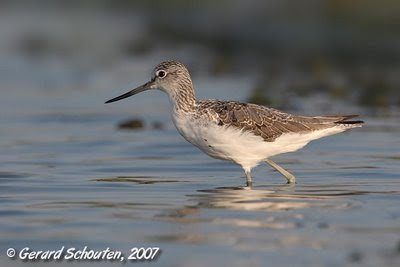 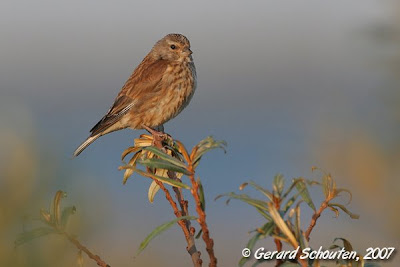 My best bird pics of the summer holiday 2007 in Zeeland, the province in the south-west of the Netherlands. I found a nice little muddy pool were I spent several mornings, lying under a camo-net.
This adult Greenshank (Tringa nebularia/Groenpootruiter), already largely in winter plumage, passed by at close-range on one of these occasions.
The Linnet (Carduelis cannabina/Kneu), I think it is a ♂ in winter plumage, was taken in late evening light.
I especially like the colors of this latter picture. The deep blue of the “Oosterschelde” sea-arm contrasts with the greenish blurry branches of Sea Buckthorn (Hippophae rhamnoides/Duindoorn) sweeping in the firm southwester, and shown left and right on the foreground. They also provide a nice frame.

Posted by Gerard Schouten at 16:30