Invasion of the Nutcrackers 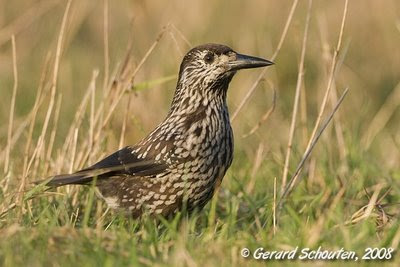 Nutcrackers (Nucifraga caryocatactes/Notenkraker) occur in areas with spruce forest, for nesting and rich supply of arolla pines (or hazel) for winter food stores. Nuts and seeds are cached in the ground layer during late summer, and nut depots are memorized in detail and can be re-found in winter with great accuracy (without a GPS :-), even beneath thick snow cover.
Central European breeders (race caryocatactes), which are vigilant and shy, are mainly residents. In some years, when arolla pines are in short supply in the far northeast, large flocks of the slender-billed race (macrorhynchos) migrate in autumn from Russia and Siberia all the way to West Europe. These birds are often remarkably tame. This bird stayed near Horst, Limburg for 2 weeks could be approached to less than 5 meter, and seems to be part of the 2008 invasion.

Posted by Gerard Schouten at 17:42