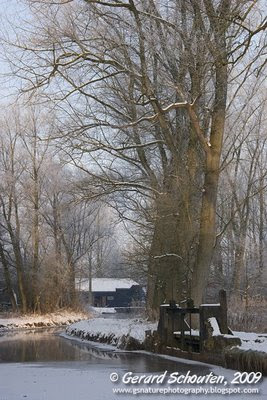 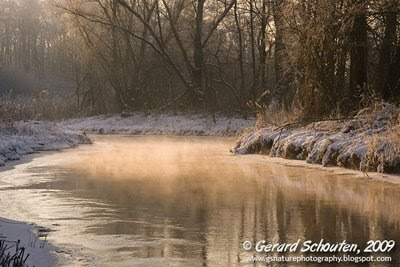 This year king winter rules! From December 26, 2008 till January 11, 2009 temperatures did not cross the zero line. In the nights, -15ºC or even slightly below was no exception near Eindhoven, in the south of The Netherlands.
I really pays-off to visit the same place multiple times under different circumstances. So, on this cold clear morning I went by bike again to the 14-th century watermill “Collse Watermolen” and took another series of photos of the partly frozen meandering stream “Kleine Dommel”.
On the second photo all 3 phases of water, i.e. ice (and both snow and hoar frost too), water and water vapor, are visible. May be it looks like you can take a nice hot steam bath here, but I would not recommend it, the water is around the freezing point and the surrounding air was -13ºC. I used a polarizing filter to enhance the colors a bit.
Posted by Gerard Schouten at 20:48