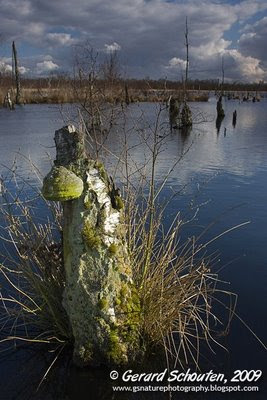 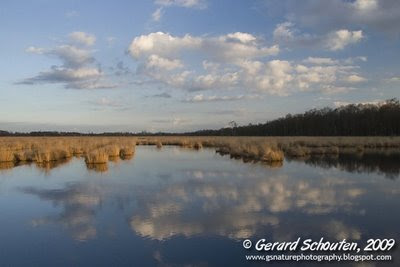 One of the most beautiful landscapes in the neighbourhood were I live is the Mariapeel, an exploited bog area. The last peat was dug around 1975. In both photos the weather was used as a background setting. The first photo of the man-made fen lake was taken on March 11-th, a stormy day with heavy clouds and some sunshine in between. However at the end of the day the wind dropped and the clouds resolved rapidly, resulting in a few friendly white
cotton-wool shapes in the sky that are reflected by the water. On today’s photo friendly cauliflower-like clouds (cumulus) grew by local heating of the sun into some showers (cumulonimbus).
For both photos I applied a circular polarizing filter, for the latter photo I used an additional ND4 gradient filter to cover the sky and to emphasize the spotlight effect on the dead birch trunk.

Posted by Gerard Schouten at 14:11