Sneak along the waterline 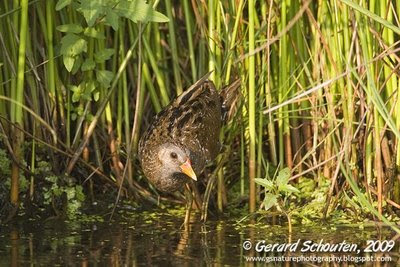 The Spotted Crake (Porzana porzana/Porseleinhoen) is a small waterbird of the family Rallidae. They are very secretive, and are mostly heard (a distinctive repetitive whiplash-like “hwuit-hwuit” call) rather than seen. Their breeding habitat is marshes and sedge beds across Europe into western Asia. The species is migratory, wintering in Africa and India.
Spotted Crakes have a short straight bill, yellow with a red base. Adults have mainly brown upperparts and blue-grey breast, with dark barring and white spots on the flanks. They have green legs with long toes, and a short tail which is buff underneath. The downy chicks are black, as with all rails.
Posted by Gerard Schouten at 14:07