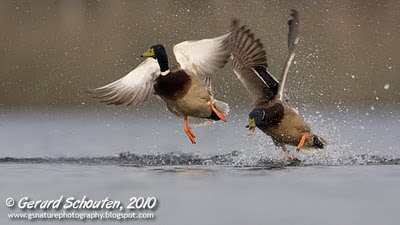 I once read that conflicts between humans can be traced back to one out of 3 things: women, money (resources in general), or power (status). In the animal world this is exactly the same. The rightmost Mallard (Anas platyrhynchos/Wilde Eend) is furious because his ♀ (not visible on the photo) was approached by another ♂.
Oh yeah, I made a small crop with a 16×9 aspect ratio of this photo.
Posted by Gerard Schouten at 18:14