The last one to disappear 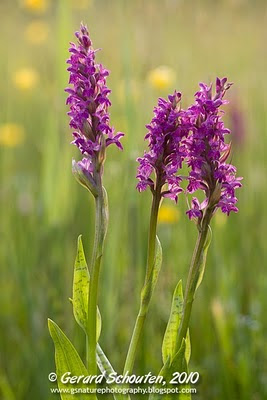 Last year I already showed you an overview of the rich flowering field (see post of May 20th 2009) that I found accidentally not far from where I live. This year I went back to make some close-ups and to identify these beautiful dark purple orchids.
Here is some additional Wikipedia info: The Western Marsh Orchid (Dactylorhiza majalis/Brede Orchis), also called Broad-leaved Marsh Orchid (Breedbladige Orchis), is a terrestrial European orchid. Its flowering period begins at lower elevations as early as the beginning of May and ends in higher elevations at the end of July. The Western Marsh Orchid grows in nitrogen-poor marsh areas that consist of several plant communities. The range extends in Europe from the Pyrenees to the Baltic and to the Don, possible even to the Volga. It is not found south of the Alps and is rare in southern Scandinavia. As with many marsh plants, the numbers of this species have been dwindling for quite some time. The main causes are the entry of nitrogen via fertilizer, drying out of the habitat, and intensive conversion to pasture. The Western Marsh Orchid does not react so sensitively to changes in its habitat. Therefore, it is usually the last of the native orchids to disappear. This tolerance makes it a still relatively common species.

Posted by Gerard Schouten at 10:48