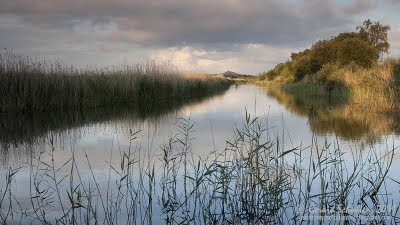 This year we went to England in the summer holiday, somehow the ancient mother of West Europe. The first week we stayed in Glastonbury, visiting a girl friend. I spent quite some time in the Sommerset Levels (a.k.a. the Avalon Marshes), a vast area of low lands comprised of Shapwick Heath, Ham Wall and the Westhay Moors. This picture is taken in Ham Wall; the cone-shaped hill in the background is Glastonbury Tor. Somewhat later this evening I observed a hunting Barn Owl (Tyto alba/Kerkuil) for about half an hour, catching a vole just 10 meter in front of me (unfortunately I took only a wide-angle lens this evening grrr $%@#*).

Posted by Gerard Schouten at 10:54