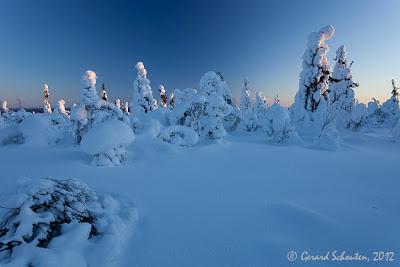 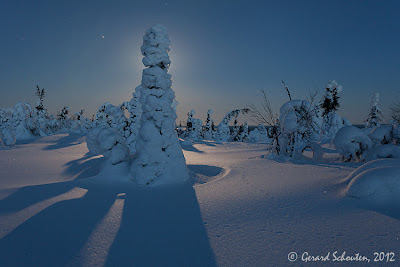 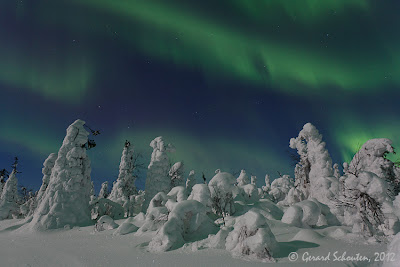 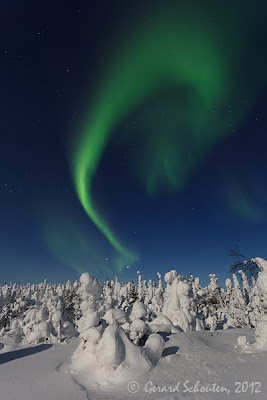 A magic day! In the afternoon we went to Kuntivaara, a hilltop east of Kuusamo, facing the Russian border. It was quite an adventure to get here by snow scooter. The idea was to photograph the sunset and the shadows of the rising moon on this snow-covered fjell. But things got even better; around 22.30 PM, quite as a surprise, the “rewontulet” (Finnish for Northern Lights) came. The greatest lightshow on earth in this spruce candle paradise was awesome! Something divine was writing in the sky, and the old snowy trees (and me!) were watching the play silently.

The Aurora Borealis (named after the Roman goddess of dawn, Aurora, and the Greek name for the north wind, Boreas) or Northern Lights are a natural phenomenon that has been surrounded by mystery and intrigue over the centuries. In the Middle Ages, auroras were commonly believed a sign from God. Amerindians call this phenomenon the “Dance of the Spirits”. The Sami people of northern Scandinavia tell of a lovely tale that when a Fox runs across the snow field his tail brushes the snow and produces sparks which are the Northern Lights.
We now know the scientific reason behind this natural light show. Auroras are associated with the solar wind, a stream of ionized particles (mainly protons) flowing outward from the Sun. The Earth’s magnetic field traps these particles, many of which funnel down and accelerate toward the poles. Collisions between these ions and atoms (oxygen and nitrogen) in the upper atmosphere, above 80 km, cause energy releases in the form of auroras.

How to photograph the Northern Lights? Basically you need a long exposure and wide-angle lens to capture it. The best results that I achieved were by using 5 to 20 second exposures. If I used longer the stars began to trail (google the “500 rule” for more information), which I didn't like. I set my camera to ISO 800 and worked with a relatively small aperture of around f/4.0 to f/5.6. You need a sturdy tripod for the job and I used mirror lock-up to combat any vibration once the shutter has been released.
On the moonlit photo Mars is visible left of the main tree, and in the vertical Northern Lights photo Jupiter (left) and Venus (right) are visible just above the horizon at low altitude.

Magical snowscapes!! Great capture of northern light. You were very lucky to have the opportunity to see it.