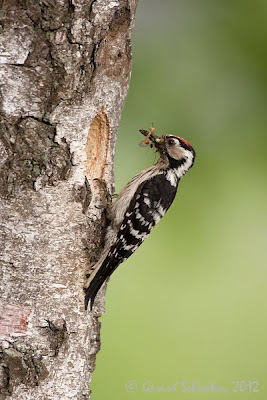 In 2011 this Lesser Spotted Woodpecker (Dendrocopos minor/Kleine Bonte Specht) also attempted to breed in this birch. However, just when he finished the cavity the tree collapsed (probably because the tree was hit by a tractor with a heavy agricultural machine). Against all odds I immediately repaired the tree with some slats. The Lesser Spotted Woodpecker returned immediately to the cavity, but unfortunately the brood of 2011 was unsuccessful. Apparently the disaster of last year has been forgotten. Now there are young birds in a new cavity in the same splinted birch, and dad returns regularly with a bill loaded with insects and caterpillars. Mum is a bit lazy and does not show up at all. When I was sitting in my hide photographing this diligent ♂, a Great Spotted Woodpecker (Dendrocopos major/Grote Bonte Specht), appeared at the scene. IMHO big brother was too interested in the hole with begging sounds. I guess he wanted to robe the nest, so I scared it off. Who says that nest photography is disturbing?

Posted by Gerard Schouten at 14:53