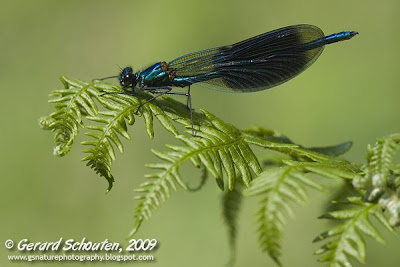 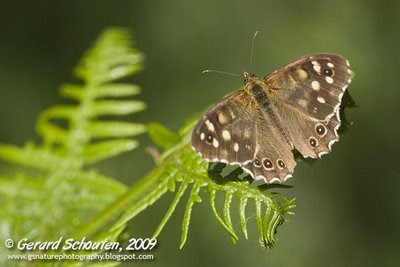 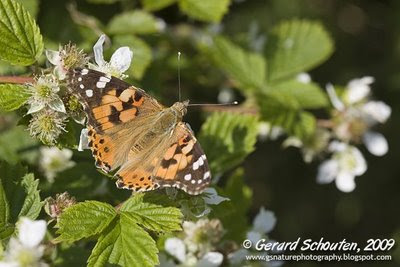 Some common insects of the Mariapeel. From top to bottom: Banded Demoiselle (Calopteryx splendens /Weidebeekjuffer), Speckled Wood (Pararge aegeria/Bont Zandoogje) and a worn Painted Lady (Vanessa cardui/Distelvlinder) on flowering bramble. I tried to photograph them with ‘context’. Below you find more detailed species information.
Banded Demoiselle ♂, as on the photo, has translucent wings which each have a broad, dark iridescent blue-black spot (or band) across the outer part and a metallic blue body. Large numbers can be found in lush bank-side plants and on floating objects in slow-flowing streams and rivers and sometimes channels as well. ♂♂ court ♀♀ by opening their wings and performing an aerial dance.
Speckled Woods are highly territorial and will defend their territory against intruding ♂♂. For finding ♀♀, there exist 2 basic strategies: 1) Vigorously defend a perch and the immediate surroundings, waiting for ♀♀ to pass by. 2) Patrol a larger territory. Perching behavior is more common in ♂♂ of conifer woodland, whereas ♂♂ of meadows tend towards patrolling behavior. The nominate form has orange speckles, the tircis race, seen on the photo has yellowish cream-coloured speckles.
The Painted Lady occurs in any temperate zone, including mountains in the tropics. The species is resident only in warmer areas, but migrates in spring, and sometimes again in autumn. On average a Painted Lady butterfly travels around 1000 miles in its life. This spring huge numbers of migrating Painted Ladies are seen everywhere in The Netherlands.

Posted by Gerard Schouten at 14:00